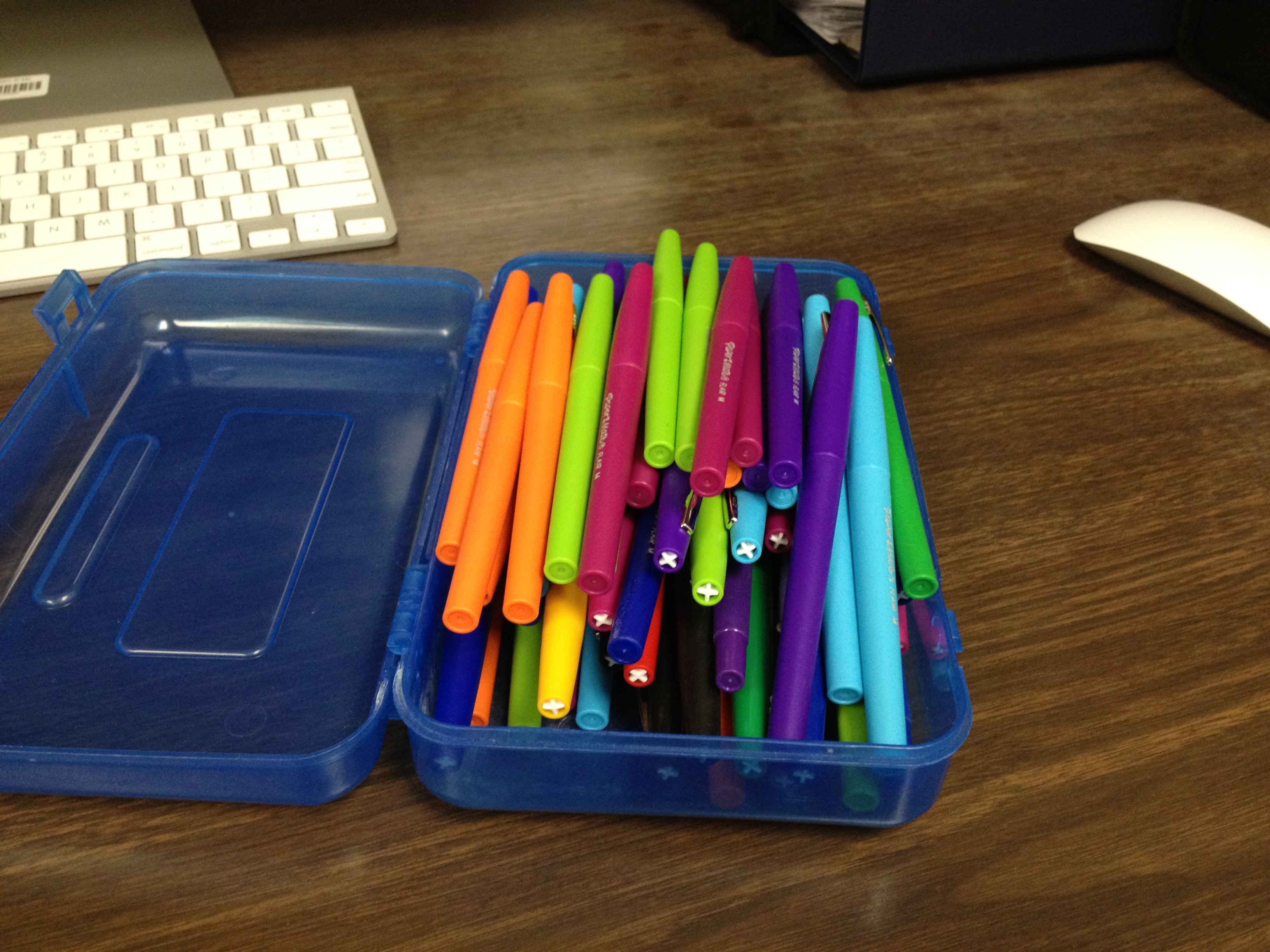 I just got back from Target and I think I now have enough felt tip pens! In all of my classes, I like to get students to the board to present their proposed solutions or proofs as much as possible. In my upper-level courses, I have adopted an inquiry-based learning (IBL) approach where the student presentations form the backbone of what we do each day in class. In my calculus courses, the student presentations play less of a role, but they are still an important part of our daily work in class.

In most cases, students are presenting material that was assigned as homework. Instead of collecting the students’ written work prior to the presentations, I let the students keep their work, so that they can reflect on what they’ve done compared to what the presenter is writing and saying. In the past, I allowed students to freely annotate and/or modify their work during the presentations. However, one problem with this is that it was usually impossible to tell what work a student had done prior to class. Certainly, in some situations, I was giving credit to a student for work they did not do. This bothered me, but I felt the advantages of giving a student an opportunity to learn something by comparing what they had done to what the presenter was doing outweighed the disadvantages. During a related discussion on an email list, Clark Dollard (Metro State University) suggested having students use colored felt tip pens to annotate their work during class. I remember dismissing this idea as silly, but a couple months later decided to give it a try. It’s such a simple thing, but it has had a big impact!

Here’s my current approach to using the felt tip pens. If students are presenting material from homework that the class will ultimately turn in for a grade, the students in the audience are only allowed to use one of the felt tip pens that I provide in class. The purple pens are the most popular and no on ever chooses one of the red ones. Student are allowed, in fact heavily encouraged, to annotate their work as much as they want with the colored pens. Their grade on the assignment will not be impacted by what they write with the felt tip pen, but rather their grade is a result of what they had before they entered class. Having students use the felt tip pens solves my concern about being able to discern what students had done before class. Moreover, students are encouraged to reflect in the moment on their work, not days later when I return it. I have nothing other than anecdotal evidence to support this, but I strongly believe that my students annotate their work in different ways than they did in the past prior to adopting the felt tip pen approach. Not only are the annotations different, but you can tell that deep reflection is occurring. At the beginning of each semester, it’s clear that a few students think that the idea is silly, but feedback from students (both in person and on anonymous course evaluations) has been extremely positive.

If you want to learn a little bit more about my felt tip pen approach, check out the slides from my “Effective and efficient grading for an IBL course” a talk I gave at the 2012 Legacy of R.L. Moore Conference in Austin, TX.