Reflections on my first semester at Northern Arizona University

My first semester at Northern Arizona University ended a little over a week ago. Well, it wasn’t my first semester at NAU. I finished my masters at NAU in May of 2000 and then worked as an instructor for the 2000-2001 academic year in the Department of Mathematics and Statistics. Returning to NAU and Flagstaff is a dream come true for me and my family.

What have I been up since I was last at NAU?

After leaving NAU in 2001, I worked for two years as a full-time math faculty at Front Range Community College in Boulder and Longmont, CO. I loved teaching at FRCC and felt like Superman everyday when I went to work. However, I had a hankering to earn my PhD, and after my wife finished her masters, I decided to return to graduate school. I started working on my PhD at University of Colorado at Boulder in August of 2003, and under the guidance of Richard M. Green, I finished in the summer of 2008.

After completing my PhD, I spent four years as an assistant professor at Plymouth State University. PSU is a predominately teaching-oriented institution with low research expectations. Each semester, I taught 3 or 4 different courses. My teaching duties always included one section of Calculus I or Calculus II and my remaining classes usually consisted of upper-level proof-based courses.

While at PSU, I was twice awarded the Plymouth State University Distinguished Professor of Mathematics award, an honor determined by the mathematics majors. Moreover, during my last semester at PSU, I was selected as the university’s sole nominee for the NH Excellence in Education Award, which is a statewide teaching award.

It was during my second year at PSU that I first started using an inquiry-based learning (IBL) approach in my classes. My strategy has been to implement IBL in my proof-based courses first and then work my way down into the calculus sequence. Due to content pressure and class size, using a full-blown IBL approach in calculus is difficult, but not impossible. I would call my current approach in calculus IBL-lite. For me, it is a work in progress.

Despite my high teaching load, I managed to maintain a somewhat active research program. While at PSU, I published three papers and began working on a few more. In addition, I gave frequent math and math education related talks. For the last three years at PSU, I also mentored year-long undergraduate research projects.

Reflection on the past semester at NAU

The teaching load at NAU is much lower, by about half, but the research expectations are much higher. This past semester, I taught two sections of Calculus I. During my last semester at PSU, I taught Calculus II, Calculus III, Linear Algebra, and Logic, Proof, & Axiomatic Systems (which is an introduction to proof course). In addition, I was mentoring three undergraduate research students. You would think that with only teaching two classes with only a single prep, I would feel like I had tons of time to get things like research done! However, I never quite felt that way. I have to cut myself some slack since starting a new job does require some time to transition.

In my view, my teaching went well this past semester. Each of my sections had roughly 45 students, which is way larger than any calculus class I’ve taught before (or care to for that matter). The class met four days per week and for most weeks, one whole class meeting was devoted to students presenting problems on the board. This was well-received by the students and seemed to be beneficial. Unfortunately, I spent most of my time lecturing during the remaining three days per week. The students didn’t seem to mind this approach; it is what they are used to after all. However, I’d like to lecture a lot less.

Even though I’ve taught Calculus I numerous times, it required more effort than I expected to adapt to teaching at a new school with new expectations. Part of the issue is that calculus at NAU is somewhat coordinated and I didn’t want to stand out too much by doing something vastly different than everyone else. This seems overly cautious to me now. I have vague plans for how I can incorporate more IBL and less lecturing, but I still need to flesh out the details.

I held five hours of office hours per week, which were wildly popular. On most days, I had at least three students
for the full hour and it wasn’t uncommon for me to have close to ten. Office hours are my favorite part of my job! My approach is to get the students helping each other. The photos below illustrate a typical day in office hours. 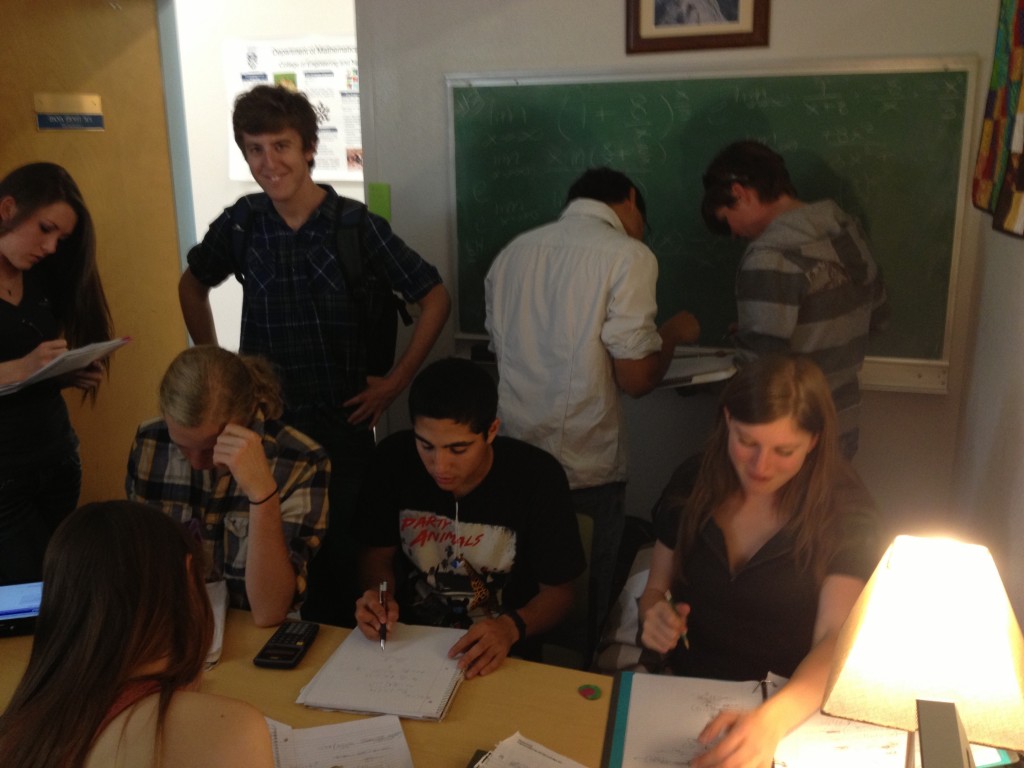 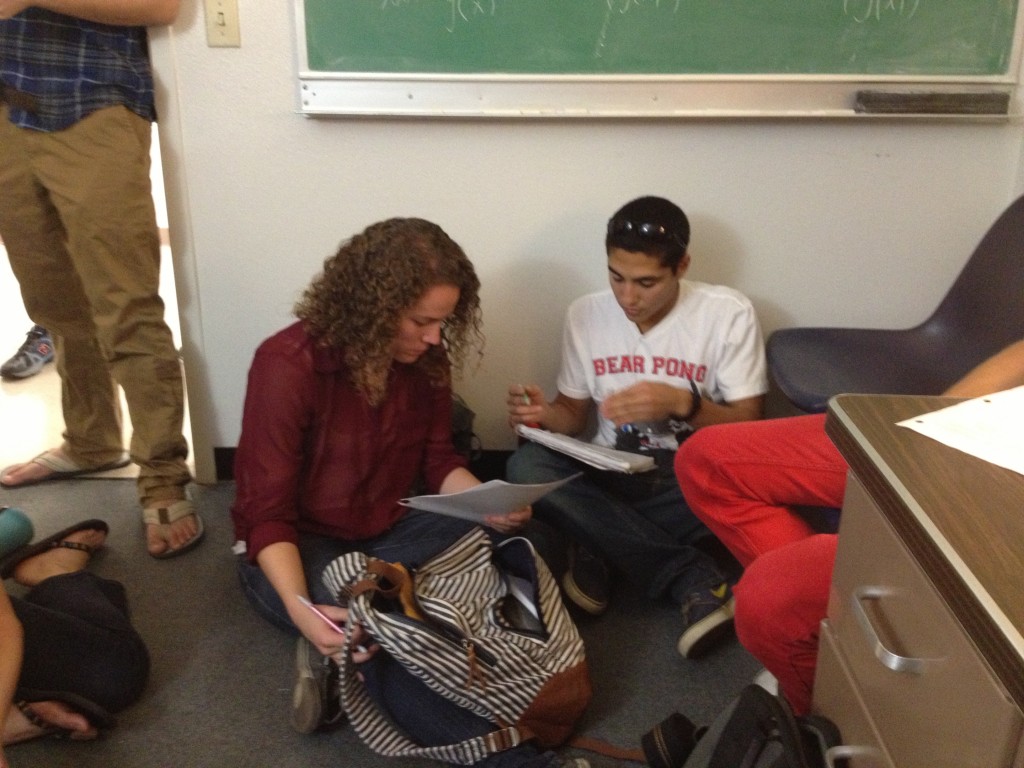 I also supervised an independent study with one graduate student (Kirsten Davis) on the combinatorics of Coxeter groups. If all goes according to plan, Kirsten will receive approval from the graduate committee and will begin writing a masters thesis under my guidance next semester. I’m excited and nervous about supervising my first graduate student.

As for my research, it has been a mixed bag. I did not manage to get much writing done and did not submit any new articles for publication. However, I have managed to get some writing done now that the semester is over and plan to submit a paper before the spring semester starts. This will make me feel significantly better. If the break was a bit longer, I could get close to having a second paper done. The goal is to find ways to be more productive next semester.

On a more positive note, I did give several talks during the semester. In fact, I gave more talks this semester than I have ever given in a single semester. Here are the details:

In addition to giving talks, I also applied for two grants, both of which are still pending.

During my last year at PSU, I applied for and was awarded a mini-grant from the Academy of Inquiry-Based Learning that provides summer salary to fund the development of IBL course materials for an abstract algebra course that emphasizes visualization and incorporates technology. You can read more about my plan by going here. Since I ended up leaving PSU, I arranged to have the grant postponed until the summer of 2013. So, technically, I’ve already been awarded one grant since arriving at NAU. Woot.

Here are a few other miscellaneous highlights from my first semester at NAU.

All-in-all, I’d say that I had a pretty good first semester. My one major weakness is not having submitted a paper yet, but I hope to remedy this soon. It’s unfortunate that this may be the only thing that some people care about. I really enjoy doing research, but I’ll never be the world’s strongest researcher. I’m confident that I can do enough to get by (i.e., get tenure at NAU) and I am content being a well-rounded academic.

I work too much. Period. Work is constantly competing for time with family and time for exercising and playing. I feel like this semester was an improvement over recent semesters in terms of balancing work, family, and play. However, I can do better. I need to spend more time with my wife and sons. Of course I want to be the best mathematics professor I can be, but not at the sacrifice of my family. I don’t think about tenure every day, but it’s definitely more on my mind than it used to be at PSU. Having written this reflection, I feel a lot more confident moving forward.